After UN forces successfully landed at Incheon and recaptured the besieged South Korean capital city of Seoul, U.S. President Harry Truman applauded General MacArthur’s “brilliant maneuver” and called the general’s campaign one of the best military operations in history. Syngman Rhee then showered praise on Truman and all Americans: “Please accept… the deep gratitude of the Korean people for United States actions which now have led to the liberation of Seoul. The Korean people will always cherish the memory of your bold leadership in defense of liberty.” All of that praise quickly went to MacArthur’s head.

The cocky general declared that UN troops would invade North Korea, defeat the communist forces, stop fighting by Thanksgiving, and return home in time for Christmas. Charles Ross recalled that his commanders told him and his fellow soldiers that the war’s end was in sight: “We had been told that the war was all but over, and we were going to do an Armistice Day parade for General MacArthur in Tokyo on November 11, 1950.”

MacArthur swiftly ordered his troops to advance across the 38th parallel toward the North Korean capital of Pynongyang, where the 1st Cavalry Division arrived on October 19. Meanwhile, South Korean forces, on the general’s orders, streamed toward the city of Unsan on the way to the Yalu River, which separated China from North Korea.

Foreign Minister Zhou Enlai of China had warned the general more than once that if UN troops approached the Yalu River, the Chinese would enter the war. MacArthur ignored Enlai’s warnings. The general simply did not believe that China would ever get involved.

Truman and the Joint Chiefs of Staff, however, were extremely concerned about Enlai’s warnings. MacArthur dismissed their misgivings, arguing that not advancing toward the border with China would result in disaster. He declared, “To give up any part of North Korea to the aggression of the Chinese Communists would be the greatest defeat of the free world in recent times.”

The Joint Chiefs urgently cabled MacArthur. They asked him to reconsider his dangerous mission. They demanded that he not bomb within five miles of the Chinese border. MacArthur responded with his usual bluster. Reluctantly, Truman and the Joint Chiefs decided to let the well-respected and headstrong general do what he had planned.

As Ross and his fellow soldiers anticipated their homecoming, Zhou Enlai’s warnings became reality on October 25. Chinese troops attacked UN forces at Unsan. Henry Burke recalled, “[The Chinese] tried to entrap us. That was their goal.” [Video: Harry Burke – Entrapment by the Chinese] Bruce Ackerman remembered what happened next: “Well, the Chinese… surrounded us. We were totally surrounded. The only way out was to go out the way we came… As I was walking through, trying to get around [a] roadblock, I heard a BOOM. I don’t know what it was, whether it was a mortar shot or a rifle grenade… It blew me up in the air, but I landed on my feet! And then my feet kept going. [I thought] this is it… my time has come… they’ll read about me in the papers.” But miraculously, Ackerman survived. [Video: Bruce Ackerman – Home for Christmas?]

On October 30, Ross and his platoon traveled all afternoon and night, arriving in Unsan shortly after noon the next day. “There was smoke in the air… like the forest was on fire. We weren’t much concerned, because we had seen fires the whole time we’d been in Korea.” But shortly after midnight on November 1, as Ross was talking to another soldier, all hell broke loose. Fire came from all directions. “They [the Chinese] had infiltrated our area… I rolled down the hill, and yelled at everybody, ‘Get under the bridge!’ From then on, organization was lost. Confusion reigned supreme… I could hear rounds hitting the bridge, the water… we had no leadership, we became all disorganized and people just went every direction. It was a terrible night… Everything was on fire.” [Video: Charles Ross – Initial Attack at the Battle of Unsan]

On November 24, MacArthur launched a massive offensive toward the Chinese border. Almost on cue, hundreds of thousands of Chinese troops stormed across the Yalu River from the north, sending US and UN troops into frantic retreat. The scope of the invasion was breathtaking. Julius Becton Jr. recalled:

At about 8:00 p.m., the Chinese Communists attacked in massive force. [Video: Melvin Hill – Surviving the Attack by 300,000 Chinese was Luck] They swarmed over the hills, blowing bugles and horns, shaking rattles and other noisemakers, and shooting flares in the sky. They came on foot, firing rifles and burp guns, hurling grenades, and shouting and chanting shrilly. The total surprise of this awesome ground attack shocked and paralyzed most Americans and panicked not a few. [Julius W. Becton, Becton: Autobiography of a Soldier and Public Servant (Annapolis, MD: Naval Institute Press, 2017)]

Thoroughly defeated and astonished at the suddenness and ferocity of the Chinese attack, a stunned MacArthur solemnly announced, “We face an entirely new war.” General Omar Bradley called it “the greatest military disaster in the history of the United States.” Time magazine reported that it was the “worst defeat the U.S. had ever suffered.” Many, including Truman, feared that World War III was nigh. Clearly, UN troops would not be going home for Christmas after all. 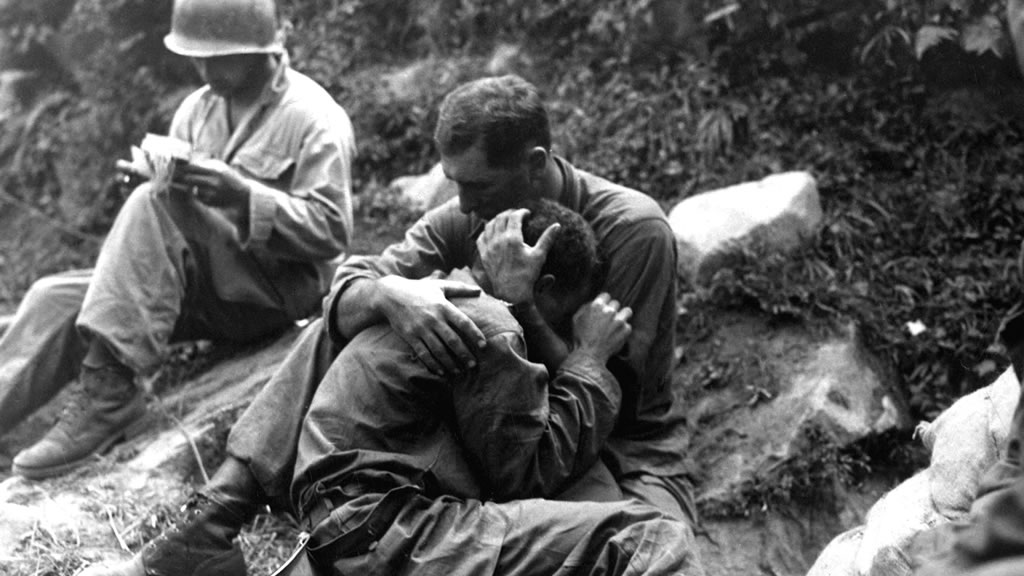 The Psychological Impact of Combat